How You Can Make Reading Effortless

Hi and welcome to Lesson 4!

How are you liking your media diet so far? Did you start reading already? If not, today’s the day!

We’ll make your reading habit effortless by picking up a technique the world’s best climbers and mountaineers have used for over half a century to scale mountains like the Mt Everest, the K2 or the Lhotse.

The Roof Of The World

A simple photograph, but one that would go around the world. Taken by his friend and companion Edmund Hillary, as the two were standing in the highest place human feet can ever touch – on the top of Mt Everest.

“Tu dhan’ya chu Chomolungma!” (pronounced “to-di-chay-komolungma), Norgay exclaims as he waves his arms up in the thin air, which contains only one third of the oxygen of air at sea level.

“I am grateful,” he says to the mountain he and Hillary just have conquered – for the first time ever in human history.

Dozens of professional mountaineers, climbers and explorers have attempted to scale the world’s highest mountain before at this point, 13 have died on their quest.

What was it that made this expedition a success? Well, enough supplies, many team members, using oxygen bottles, Tenzing’s previous experience, good weather conditions, many factors had to come together.

The one striking difference though, was that the 1953 expedition had set up more camps and intermediate stopping points than any other team before.

They were the ones who established Base Camp, as well as Camp I, which was set up above the notorious Khumbu Icefall, known for being one of the most dangerous sections of the Everest climb. But they didn’t stop there, creating nine camps in total on their way towards the South Col, where climbers officially enter the death zone – a height level the human body can never acclimatize to and will deteriorate in after a few days.

Today all climbers move up the mountain through several of these camps before pushing towards the summit, all the way up to Camp IV or Camp VI, depending on the route they’re taking.

All of these camps were originally set up by Hillary and Norgay’s expedition team.

However, the two weren’t the first to go for the summit. After their comrades had to give up on May 26th, reaching the South Summit and coming within just 100 m of the roof of the world, Hillary and Norgay got their shot on May 28th.

What did they do differently than their fellow climbers? They decided to set up yet another tent, just 1,100 feet from the summit, where they could spend the night.

When they set off at 6:30 AM for the final ascent, three days after their fellow mountaineers had had to surrender, they knew they had plenty of time. And they needed it.

Pushing past the South Summit, beyond the vertical, 40 ft rock face that would come to be known as the Hillary Step, and planting one spike-cladden, snow-booted foot in front of the next – up the angled, exposed snow slopes with 10,000 feet drops on either side.

Even though the two spent little more than ten minutes at the summit, it would be ten hours before a team member would see them again.

Covering those last 1,100 feet took them five hours – one-way. That’s five hours for what’s normally a 10-minute walk! As it turns out, when you’re in the death zone, where your body is literally dying with every passing second, you can never set up too many camps.

Fast forward to 1996. Dozens of people now climb Everest each year, as more and more commercialized, guided tours are offered. This season, two teams even compete, not only for the attention of the press, but also about who can get more of their amateur climbing clients to the summit of Mt Everest: Mountain Madness and Adventure Consultants.

Around midnight on May 10th, 33 (!) climbers, sherpas and guides started their ascent from Camp IV towards the summit. Knowing that the last safe time to reach the summit was 2:00 PM, the big number of climbers, among unprepared ropes, caused numerous delays.

Over 15 of the climbers would not finish their 3,000 foot ascent to the summit by that time, some reaching the top of the mountain as late as 4:00 PM.

As a full-scale blizzard set in around 5:30 PM, it dawned on many that this would come to be known as the worst day in Mt Everest history.

In the hours that followed, eight people died during their descent, including expedition leaders Rob Hall and Scott Fischer, both world-class mountaineers.

1. The 1953 took two weeks to go from Camp II to Camp IV, slowly climbing, acclimatizing, setting up camps as needed and returning to lower heights when they had to. Then they took another four weeks to reach the summit.

The 1996 expedition didn’t set up any of their own camps, using only established camps and made only one short acclimatization stop at Camp III, before ascending from Camp II to Camp IV within a single day, attempting to summit one day later.

2. In the end, the first 1953 climbers to reach the summit, Norgay and Hillary, were the ones who set up the most camps, reducing their last within-one-day-climb to 1,100 feet.

The 1996 expedition tried to go from Camp IV straight to the summit – a 3,000 foot climb – within not just one day, but a limited time frame in said day.

What’s the principle here? I think it’s this.

The 1953 expedition didn’t have a Camp I, Camp II or Camp IV to start from. They didn’t even have a Basecamp. They just started. But they took their time, kept acclimatizing, adjusting and setting up their own camps as needed.

The 1996 expedition had everything laid out for them. The structure of camps. How long to stay where. There were even different routes to the top of Everest already. But they never adjusted. They didn’t set up their own camps. They rushed. And they died.

When you’re trying to go from point A to point B, it doesn’t matter so much where you start, as long as you keep adjusting by setting up more camps.

That’s why today’s principle is called:

The gist of it? Just get started, take your time and keep adjusting. 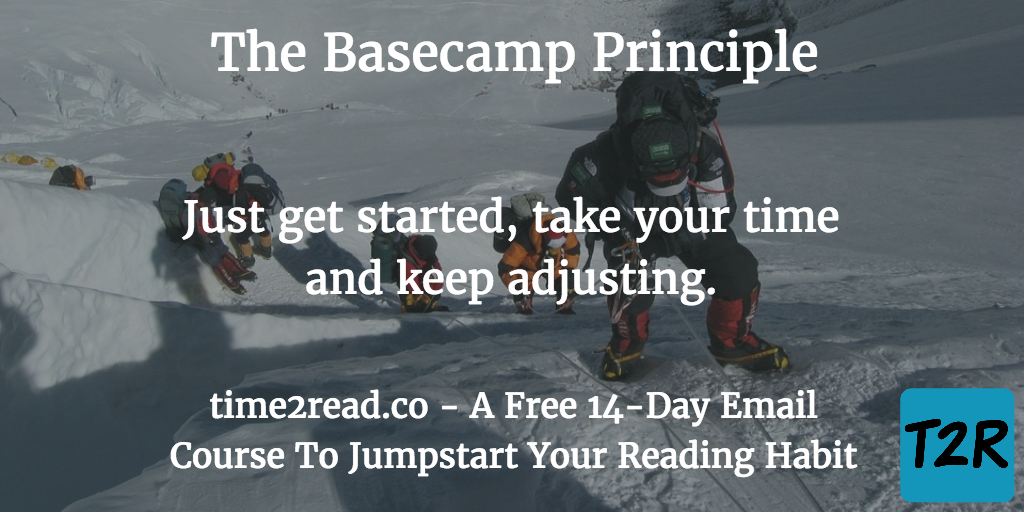 When you want to pick up a new habit, like reading, it doesn’t matter much where you begin. Whether it’s a cookbook or a textbook, a chapter or a page, 10 minutes or half an hour.

What matters is that you don’t rush in getting to the next stop and that you keep adjusting. As with the camps, even the best laid-out plan might fail. There is no map, remember?

Lucky for us, reading doesn’t require you to drag your body to the cruising altitude of a Boeing 747. You can set up your basecamp right here where you are, right now.

Today, our experiment is really simple: Pick a random reading time and spend that amount reading your book.

How? Simple. Just click one of the six gifts below and give yourself the gift of reading. You’ll be randomly assigned one of the following numbers of reading minutes: 5, 10, 15, 20, 25, 30.

Since the risk of picking a reading time that’s too ambitious, as opposed to trying to reach the wrong camp on Everest, is essentially zero, I recommend you go for whatever number you first land on. Based on whether you manage to read this long or not, you can then adjust to the next higher or lower level tomorrow.

However, if your assigned reading time makes you feel uneasy just looking at it, switch to the next smaller number.

Stick to your reading time for today and tomorrow. We’ll check in again the day after tomorrow, but chances are you’ll naturally reach a point where you feel confident to increase. And whenever you overshoot, you can set up camp at a lower level.

Bonus: If for some reason you still haven’t picked a book, then it’s about time! Time 2 Read has you covered though, simply email a friend about this course and I’ll send you an exclusive selection of 22 free books to choose from.

In chemistry, each reaction has a level of activation energy. You have to apply an ever-increasing amount of heat to the molecules to reach the point where the reaction is set off.

But it’s all downhill from there, the energy just keeps rolling and rolling, until the final substance is created.

Quite often, our habits are the same. Once we put on our shoes and go out the front door, we’ll run. If we can get ourselves to order a salad, eating it isn’t a problem. It’s easy to keep reading after you’ve read for 5 minutes already and easy to just finish the chapter after 25 minutes are up.

Even for the world’s greatest mountaineers, a perfect plan is useless if they don’t keep adjusting it. You can always set up more camps. But you have to take the time to do it.

Be impatient in starting the climb, but patient in reaching the summit. Get started fast, take time later and adjust as you go.

By picking a random reading time and sticking to it for the next two days, you’ll do just that. Build consistency until you feel comfortable in leveling up. I’m sure Edmund Hillary and Tenzing Norgay would have done the same.

The next lesson will hit your inbox in 2 days. In it, we’ll discover how chess-legend Bobby Fischer turned his greatest weakness into his greatest strength and how you can do the same to trigger yourself to read – without even thinking about it.

Rooting for your reading,
-Nik

PS: Here is our table of contents with the previous lessons.

PS: Share this 7 lesson email course with a friend now and I’ll send you a hand-curated collection of 22 free books, both fiction and non-fiction, some of which you can’t get anywhere else for free!